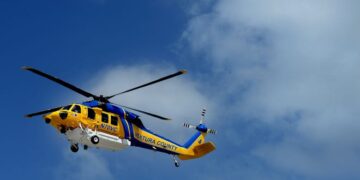 “We are now tripling our water dropping capabilities with the addition of these two Firehawk helicopters,” said Ventura County Fire Chief Mark Lorenzen during a news event at the Camarillo Airport Thursday morning. The gleaming blue-and-yellow aircraft served as a backdrop, each with its number painted in blue on the tail: 4 and 5.

The aviation unit is a partnership between the fire agency and the Ventura County Sheriff’s Office, with the helicopter fleet providing police, fire and search-and-rescue support. Personnel from both departments were on hand Thursday for the formal unveiling and demonstration flight.

The new helicopters were formerly Sikorsky Black Hawk military aircraft used by the Army National Guard. They were built around 2006 and have low flight…