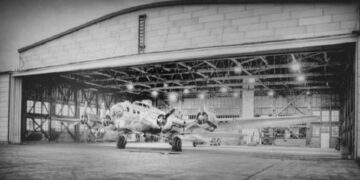 The United States’ involvement in World War II led to a need for combat training of Army Air Force pilots and crews.

Training operations were scattered throughout most of the West in isolated regions. In January of 1943, the Army Air Force announced that the war effort would include a training base in Madras.

The Air Force ordered plans to build two hangars to support the combat training of air crews, primarily for the Boeing B-17F “Flying Fortress” bombers. It was established as a training facility for the 318th Squadron of the 88th Bombing Group of the Second Air Force.

Construction of runways, taxi-strips and supporting auxiliary buildings was begun. The new facility was known as the Madras Army Airfield. The rapid acceleration of activity led to an influx of several hundred officers and pilots…