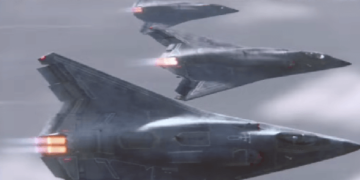 F-35 & F-22 Raptors Could Be A Passe As Lockheed Martin Working On US’ Next-Gen Fighter Jets?

F-35 & F-22 Raptors Could Be A Passe As Lockheed Martin Working On US’ Next-Gen Fighter Jets?

If the US is at the very summit of achieving heights never ever seen before in the field of modern aviation, it has certain aerospace giant to thank for it, a corporation which has made America dream big, a revolutionary company which has its main office on Rockledge Drive in Bethesda, Maryland— Yes, we are talking about the Lockheed Martin.

Power Index: US The Most Dominant Military Power, China The Financial Super-Power

An absolute leader in designing state of the art machinery, Lockheed has been the chief architect of US’s most prized possessions in their history, a long list of fighter jets and other aircrafts ranging from the F-35s, F-22 Raptors, F-16 Falcons, F-117 Nighthawk and the SR-71 Blackbird.

Having seen the success of the fifth-generation F-35 Stealth fighter around the globe with the aircraft setting the bar very high for any future fighters, it looks now that…

How Rush lived, worked and rocked through the 1980s